I joined Athabasca University in 2006 as Professor of Heritage Resources Management and as Director of the Historical Resources Intern Program. Having earlier tutored Canadian history at AU, I had a good sense of how distance education works in practice. So, when years later I was offered the chance to set up a heritage resources management program at AU, I eagerly accepted, knowing that the university's leadership in distance education offered an exciting and innovative opportunity for teaching heritage resources management.

Between 2001 and 2006 I taught Museum and Heritage Studies at the University of Calgary. Prior to this, I had worked in the heritage field for almost twenty years as a consultant (based in Edmonton) and had also worked as a volunteer with a range of heritage groups and agencies.

My involvement with the Heritage Resources Management program at AU thus expressed a long professional interest and commitment. I have been drawn to how we find meaning through the remnants of the past-texts and memories, artefacts, buildings, landscapes and impressions on the earth. Always there is a sense of how incomplete and sometimes arbitrary these records and traces are, and how the things that survived by accident or design now shape how we imagine and re-imagine past lives. Rather than an obstacle, this incompleteness is tantalizing because it gives us so many different ways to glimpse what life has been like, and to understand what it has meant, and continues to mean, to be human.

Articles have been published in the Journal of Canadian Studies; Lobstick An Interdisciplinary Journal; Prairie Forum; Histoire sociale/Social History; Alberta History; The Literary Review of Canada and in several books. 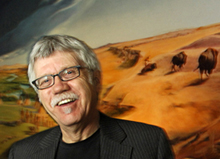